I don’t know if doubt makes faith more real, but what I know is there is a lot of doubt in real faith.

Christians are (I think more than most) determined to be certain about everything about them.  When there are aspects of our faith which feel uncertain, it makes us nervous.  Most of the time we just gloss over those points.  If we are pressed, we thump our Bible a little harder when we shout the party line.  We are afraid of how messy faith might be if we admit some of the deepest questions are not easy, but are unanswerable. 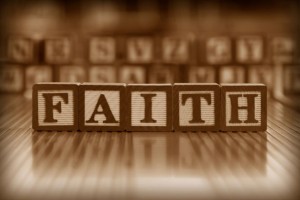 Over the last several months, I have spent regular time with a friend whose daughter was raped by a boy at church.  His faith has gone through a number of deep valleys and he is not, by any means, out yet.

Many well-meaning Christians have assured him, “God has a plan,” or “I know God will bless you in all of this.”  Others have offered counsel that he and his wife should have been more restrictive as parents, and if they had, this would not have happened.  Others have told them their daughter was asking for it.

Is it any wonder my friend’s faith has been shaken?

He is wondering, “If God has a plan, why was my daughter’s rape a part of that plan.”  I don’t have an answer.

He is wondering, “Why do these people who say they love me insist on poking sharp sticks at me?”  I don’t have an answer.

The real, unanswerable questions of his faith are not something he ignores, or glosses over.  Instead, he freely talks about it.  He is not ashamed of having a faith that has questions, but lives by the faith he has.  I would rather have real and messy than plastic, neat and tidy.

My friend, S, will probably never read this blog post.  If he does, I want him to know how much I admire his faith.  He has taught me much in our time together.  His strength is remarkable.

Thanks, S, for having real faith.  Those of us watching from the outside are inspired to have it ourselves.

I am a pastor at a local church.
View all posts by shepherd →
This entry was posted in Church Life, Personal, Theology. Bookmark the permalink.